Police brutality in Kenya is not new and with the COVID- 19 pandemic the police remains to be accused of using excessive force and violence in the name of imposing the lockdown.

On March 25, President Kenyatta announced a government plan for a nationwide dusk-to-dawn curfew starting March 27. Police appear to have enforced it chaotically and violently from the start. In downtown Nairobi, police arrested people on streets, whipping, kicking, and herding them together, increasing the risks of spreading the virus. In the Embakasi area of eastern Nairobi, police officers forced a group of people walking home from work to kneel, then whipped and kicked them, witnesses told Human Rights Watch. 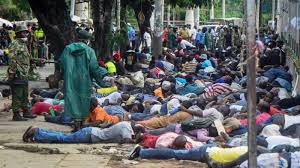 In Mombasa, on March 27, more than two hours before curfew took effect, police teargassed crowds lining up to board a ferry back home from work, beating them with batons and gun butts, kicking, slapping, and forcing them to huddle together or lie on top of each other. Video clips on local television stations and social media showed that the police were not wearing masks and other protective gear, which authorities were encouraging everyone to wear and have since made mandatory.

Despite these killings being well documented by both state and non-state institutions, the policemen responsible for these acts have rarely been held to account including by the police oversight authority. One or two cases that elicit public interest and outrage are investigated for a while with no prosecutions and justice for the victims.

On March 30, President Uhuru came out to apologize over the use of force by policemen following criticism from various groups over abuses in Mombasa but did not instruct the police to end the abuses.

On 8th June Kenyans held peaceful protests to condemn police brutality and an increase in extrajudicial killing since a dusk-till-dawn curfew was enforced in March to mitigate the spread of Covid-19.

On March 31, at around midnight in the Kiamaiko neighborhood, in Nairobi’s Eastlands area, the police shot live ammunition at Yassin Hussein Moyo, 13, hitting him in the stomach and killing him, witnesses said. His father, Hussein Moyo, told the Kenyan media that his son was standing on the third-floor balcony at midnight alongside his siblings when the bullet struck him.

March 27, 2020, After dropping his client who was in labor at Mwahima Likoni Hospital, 49-year-old Hamisi Juma Kambiriwa, a boda-boda operator, was on his way home with another passenger named Hassan Kitosha. Kitosha narrated to Standard Media how they encountered police officers who then hit Juma on the shoulder, this caused him to lose control of the vehicle and they ended up in a ditch filled with muddy water. The officers allegedly left Kitosha to leave but they beat Juma with batons and gun butts. He arrived home at 8 pm, severely injured, but was unable to go to the hospital because of the curfew. His family took him the next morning and he died on Sunday at Msambweni Hospital. IPOA released a statement saying it will be investigating the case.

On March 27, 2020, 26-year-old boda-boda rider, Calvince Omondi, was on his way back from taking a customer from Oyugis to Kendu. On his way home, Omondi met a group of police officers from Kosele Police Station. According to Omondi’s father, the officers stopped Omondi at Kosele trading center and beat him unconscious because he was operating outside curfew hours. The officers then brought him to the hospital. Omondi’s father described to the media how he found his son unconscious and how he remained speechless for 2-days until he died on Sunday morning. Since the incident, IPOA has sent out its Rapid Response Team to investigate the case.

Omondi’s father spoke of how his son left behind a wife and child. Since Omondi was the breadwinner of the family, the family is left in emotional and financial pain. Omondi’s family is left wondering why the police officer used excessive force when they could have just arrested him.

According to reports, Ramadhan Juma went missing the night of April 1st.  His family was extremely worried especially since Juma had a mental health disability. They set up a search party the next day and found him with critical injuries at Kakamega County Referral Hospital. Juma succumbed to his injuries that morning. It is alleged that Juma’s injuries were the result of police brutality from implementing the curfew. The National Police Service is refuting the claims. Investigations are underway to confirm the circumstances that caused Juma’s death.

Erick Ng’ethe was a 23-year-old, who came from a large family where he was the 15th born. Ng’ethe worked as an accountant for the Nile Pub and Restaurant in Diani and had missed a few days of work during the first week of the curfew. On April 1st, he was not in a financial position to miss any more days so he proceeded to go to work. MUHURI reported that around 9 pm, police officers attempted to raid the bar but the main door was locked. The officers broke part of the roof and lobbed tear gas canisters inside forcing Ng’ethe to open the door. The police began physically assaulting customers who were inside. Ng’ethe was choking on tear gas, crawling on the floor when an officer pounded his head with a club.  The police officers took him with them when they left. According to sources, upon realizing Ng’ethe had succumbed to his injuries the police officers attempted to drop his body back at Nile Pub, but they found it was locked. They proceeded to drop it off at Kwale Morgue. When MUHURI accompanied the family members to the morgue they discovered his body with blood all over it and a great depression in the back of his head. Police officers had booked him under “unknown” and stated they found his body on the road. However, this narrative has been refuted by many witnesses. The case is currently under investigation.

On March 27th, 2020, Ochieng was beaten by police officers as he was coming from his father’s, in Korogocho. He succumbed to his injuries.

On April 5, 2020, John Muuo Muli, a 27-year-old carwash attendant in Ruai, was found by police officers after curfew and the police officers severely beat Muli. According to media reports, Muli’s brother could not take him to the hospital that night because they feared further police harassment. The next morning, Muli went to Mama Lucy Kikabi Hospital and succumbed to his injuries. According to the post-mortem, Muli’s intestines had been raptured as a result of the police beating.

On April 7, 2020, Idris Mukolwe, a 45- year-old tomato vendor, died from suffocating on a tear gas canister. The tear gas canister was allegedly thrown by security officers who were enforcing the ban on trade in Mumias town. Witnesses interviewed by media claim that the tear gas canister exploded in Mukolwe’s face and he ran out of air and started suffocating. When his friends from the market tried to help him, the police threw another canister at them forcing them to leave their friend alone.

April 13, 2020, Mzee Maurice, a mentally disabled individual from Kakamega, was attacked by police officers after he was found outside past the curfew hours. He was rushed to the hospital the following morning after his sister-in-law found him by the roadside. He passed away on reaching the hospital

Vitalis Owino, a 36-year-old man from Mradi area market in Mathare, left his house around 6 pm to get some food for his family and use the public toilet facilities. For unclear reasons, police officers physically assaulted Owino. Owino succumbed to his injuries. His body was found the next morning in Mradi area market. The body was taken to Muthiaga Police Station after residents blocked area police from picking it up.

Abdallah Mohammed was allegedly arrested by the police in Tezo Roka, Kilifi for violating the curfew regulations. It is claimed that the officer assaulted him before being released. Abdallah died while receiving treatment in a nearby clinic.

On May 23, 2020, around 10:30 pm, Elvis Emmanuel Stemo was found outside his home after curfew and was arrested, shot, and killed. The post-mortem report stated his body showed signs of being hit by a blunt object; it also displayed two bullet wounds in the leg and one in the neck.

Maurice Ochieng died 5 days after being beaten up by police officers for not wearing a mask. He was originally detained at Maseno Police Post on May 20th but was allegedly released after his condition worsened. On May 25th, Ochieng collapsed and was taken to the hospital and was pronounced dead on arrival. The family is waiting for the autopsy report to confirm the cause of death.

June 1, 2020, Mathare, Nairobi A 51-year-old man, known by the community as Vaite was killed in Mathare 3c, around 7:40 pm. Vaite was shot 3 times at a close range, 2 bullets to his thigh, and 1 to his lower abdomen. The police officers were alleging enforcing the curfew, but Vaite was a homeless man and would sleep by the roadside, at the same spot where he was shot. It is alleged that the police officers fled the scene after they shot Vaite, leaving him to bleed to death.

Vaite was well-known by the community, as he would collect and sell plastics during the day, and would sleep outside at night.  He was a university-educated automotive engineer, who suffered a mental breakdown, 10 years ago, after he and his wife split up.